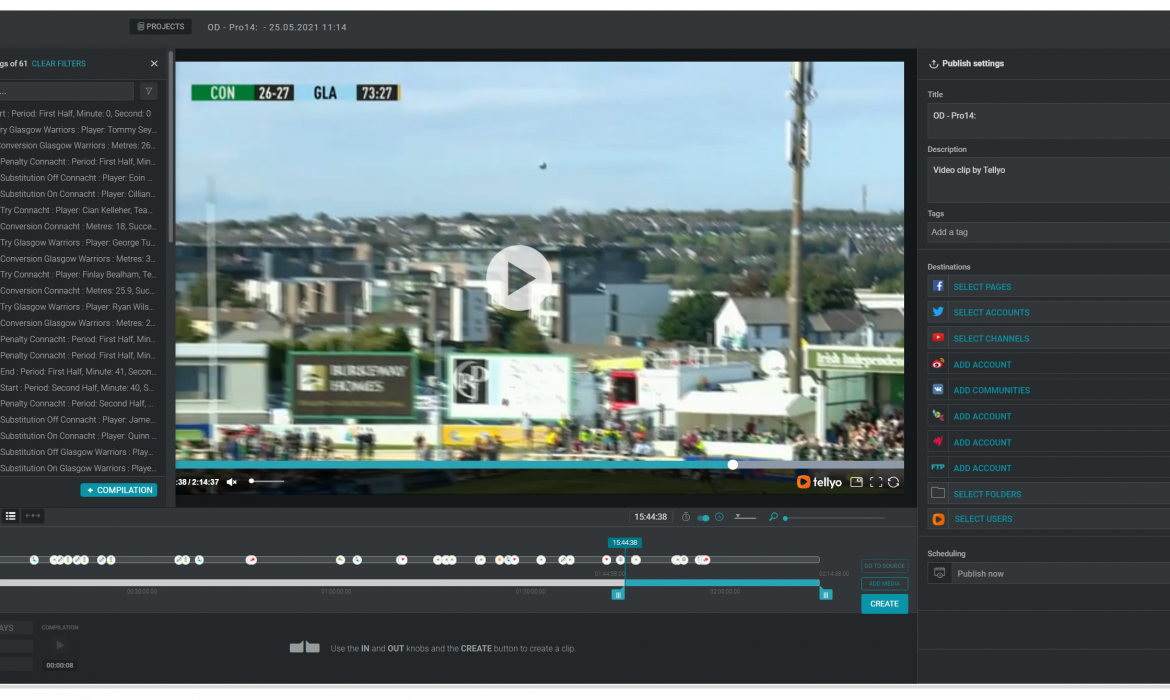 The Guinness PRO14 Championship is a global rugby tournament that pits 14 teams from Europe and South Africa against each other in an exciting league format that culminates in knockout stages and a showcase final. Our Tellyo platform has enabled PRO14 to deliver a robust video content strategy that is driven by the creation and distribution of video clips to drive fans to its live streams.

Data coming from clips created and distributed via Tellyo Pro.

With the media landscape fast-evolving, PRO14 has been quick to create video content for new social channels. As a content rights holder, its strategy is about getting videos out to PRO14 rugby fans so they’re part of action, as it happens. As one of our beta partners, the organisation is also helping us to develop and test new products and features, such as our recently launched Stream Studio, Smart Clips and Auto Clip-to-Post.

Initially used as a test during the early league stages of the 2017/2018 season, PRO14 now use Tellyo to live stream games and to clip videos specifically for social media channels. During the coming 2018/2019 season, PRO14 will also push video content from Tellyo to its new OTT subscription platform. With relevant permissions and access rights in place, PRO14 is able to give its teams access to Tellyo, meaning each team’s media unit can use and share PRO14 video content. This has helped to amplify tournament matches further across social media, whilst also strengthening relationships with PRO14 teams by continuously building content resources that deliver value to everyone involved.

“We’re seeing major growth in fan viewership and engagement related to the video clips we’re now able to create and share in real time. This is all down to the video strategy we have been able to enact thanks to Tellyo. It plays a significant role in our direct to consumer strategy by giving us the means to elevate the online experience to new levels through engaging and timely content.”